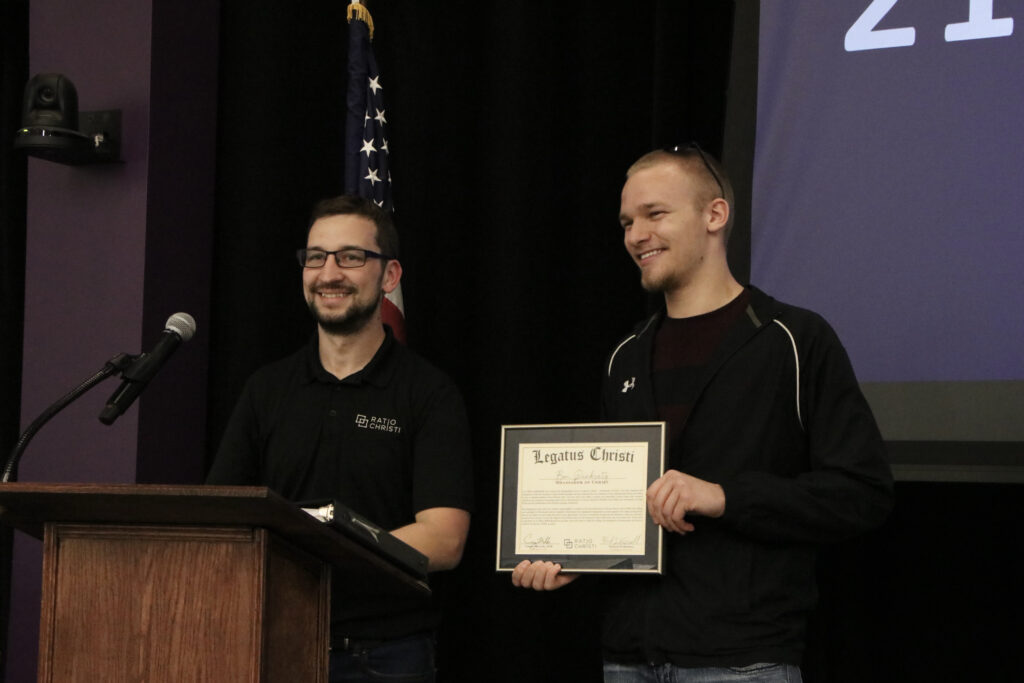 Ben Pankratz has been an advocate of apologetics-evangelism ever since I met him four years ago. During his senior year as an undergraduate at Kansas State University, he pioneered the planting and operation of a Ratio Christi club. He has genuinely grasped the mission and vision of Ratio Christi. His heart is for building ambassadors for Christ by equipping them to give historical, philosophical, and scientific reasons for following Jesus Christ.

He does this by setting aside time each week for evangelism and how he leads the Ratio Christi club on campus. Ben’s teaching style is undeniably student-focused – while he is more than capable of standing and presenting a concept lecture-style, Ben prefers to sit with his fellow students and lead a discussion through an apologetics topic. His apologetics interest/focus derives from Frank Turek’s four questions: Does truth exist? Does God exist? Are miracles possible? And Is the New Testament reliable? Ben’s evangelism style mirrors Greg Koukl’s Put a Rock in Their Shoe. In addition, with Ben at the Ratio Christi club helm, Greg Koukl’s three questions from Tactics (What do you mean by that? How did you come to that conclusion? Have you ever considered…” have become an ingrained part of the club’s DNA?

· When did you come to Christ as Lord and Savior, and how did that come about?

Being raised in the church, I learned the essentials of the faith. I then decided to make my faith my own, turn from evil, and be baptized at fourteen. Almost immediately, I felt the effects of choosing a side in a spiritual war, a war I was unprepared for on every front. The fight for my heart turned in my favor as I leaned on Jesus in faith; however, I had countless intellectual doubts and no answers.

· In your high school church youth group, how much did you learn about the Christian faith and reasons to believe?

During high school, every church group I was a part of focused solely on cultivating a personal relationship with Christ. What are the reasons to believe? I thought there was no such thing at the time. This naturally shifted my focus to holding onto Jesus in faith with no evidence, which continued throughout my first year in college.

· How did you become interested in apologetics, and how did you get involved with Ratio Christi?

It wasn’t until I reached my breaking point at the hands of my anti-Christian peers and professors in college that my desperate quest for truth reached a climax. Finally, I found apologists like Frank Turek, who opened up the intellectual side of my faith and allowed me to worship God with my mind, resting in the truth of Christ.

I then began my new quest to share apologetics with any Christian I could find and start apologetics groups at my schools and churches. Eventually, I met Wesley Farewell through a friend of my fiancé, and we began making plans to expand Ratio Christi to Kansas State University. After much promoting and planning, Wesley and I started and facilitated the growth of the KSU Ratio Christi chapter.

· What impact has the Ratio Christi College ministry had on your walk with God and your ministry?

Uniting my passion for apologetics with Ratio Christi has opened up my personal walk and ministry for Christ while resting any doubts as to the effectiveness of apologetics. I’ve been so blessed to use apologetics to reach people like Andrew in truth and grace here at Kansas State. I met and talked apologetics with Andrew as an ex-Catholic atheist, and by God’s grace, he let me baptize him as a new believer! God has shown me through encounters like these that apologetics is critical in reaching the culture and reinforcing the believer.

The Ratio Christi chapter at Kansas State has grown from five members meeting off-campus last semester to fifteen members meeting on-campus this semester. We currently hear a brief lesson from a student officer and then practice using concepts through tactical conversations. We also have hang-out nights, student-led mock debates, and host speakers on campus.

· What were some of your favorite areas of involvement with your local RCCP chapter?

A highlight from last semester for the KSU Ratio Christi chapter involved hosting Ben Blowers, Director of Ratio Christi College Prep in Lincoln, NE, to speak on the topic “Is Abortion Moral?” on campus. In addition, many in-person and watching on our Instagram Livestream were encouraged after many heated debates on campus.

· What does your Legatus Christi award mean to you?

The Legatus Christi award will encourage me as I strive to use apologetics to engage the culture and pursue further formal education in apologetics.

· How do you envision taking the apologetics you have learned through Ratio Christi into your future endeavors?

The apologetics training, I receive now will echo forward and support my future ministry endeavors. The world views and ideas that I’ve absorbed will help me continue to serve Christ and reach the lost.

· What are your short and long-term career/ministry/mission plans?

My current calling is to grow in my role at Ratio Christi. Whether I start new chapters or support existing ones, my passion is to proclaim the validity of Christianity to non-believers and believers alike.

· Would you consider returning to work with your RC chapter, starting one at another school, or working with RC in any other capacity?

Being a part of Ratio Christi is definitely in my future, in whatever form it takes. I hope to go where I can be most effective in applying Ratio Christi’s niche of apologetics and evangelism. I don’t recognize any other ministry reaching the culture like Ratio Christi.

· What would you say to other students who might be considering getting involved in Ratio Christi, whether they be skeptics, seekers, or believers?

What is your worldview? What do you mean by that? How’d you come to that conclusion? Have you ever considered what it means to seek and follow the truth? As a student, you’re seeking truth through a major and trusting your professors, so why not seek truth in your worldview? If you become a humble truth seeker, you will not be disappointed because it will lead you to Jesus as the Truth. Then the Truth will set you free.