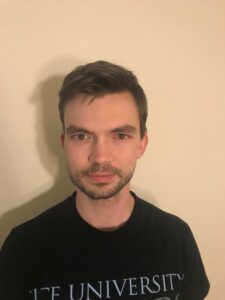 Daniel Land has been nominated and will be awarded the prestigious Legatus Christi Award for exemplifying the character, conduct, and core values espoused by Ratio Christi Campus Apologetics Ministries, Inc.

Daniel graduated from Rice University in 2017 and entered the graduate program in Philosophy at the University of Houston where he was instrumental in establishing a new Ratio Christi chapter. Under the guidance of Chapter Director Eric Scott, he diligently followed the necessary steps to establish a charter and become fully recognized as an official student organization. He completed the process, which can take years from inception to acceptance, in less than nine months.

Daniel attracted a strong core group of student leaders and served as the first club President, meeting first at local fast-food and pizza restaurants and on benches at the Student Union before gaining access to a meeting room on campus grounds. He also engaged distinguished Law Professor Dr. Johnny Buckles, as the group’s faculty sponsor. Dr. Buckles has proven not only to be a perfect campus ally and meeting content contributor, but is a Harvard Law Review published advocate for Christian values as well as an accomplished Bible teacher and Christian apologist.

Beyond his material accomplishments on behalf of this newly formed chapter, Daniel has shown himself to be an outstanding philosopher and apologist with a gift for teaching, encouraging, and building up others. Rather than clinging to his title and position, Daniel graciously stepped aside to allow another to take the leadership mantle as he became academically overwhelmed, exemplifying Christian humility and modeling servant leadership. His continued input and support strengthened the chapter and ensured the success of his predecessor. He has set the standard for young ambassadors for Christ to emulate as they pass through this chapter in coming years.