Ratio Christi at the University of Houston to Confer Legatus Christi Status Upon Samuel T. Scheufler

Previous Next
Ratio Christi at the University of Houston to Confer Legatus Christi Status Upon Samuel T. Scheufler 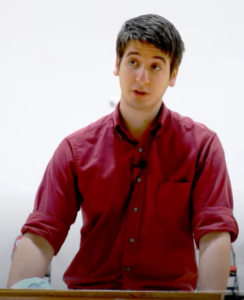 Sam Scheufler, a graduate student in engineering, assumed the reigns of a newly formed chapter and proved himself worthy of Ratio Christi’s highest honor. As Chapter President, he clearly exemplified the attributes of conduct, character, and core values that Ratio Christi hopes to instill and reinforce in students before leaving the university. The organizational and administrative skills Sam has honed while presiding over secular organizations at the University of Houston were exactly what was required in a student leader in the club’s formative stages.

Sam showed his love for, and mastery of apologetics in his choice of content in scheduling and leading weekly meetings for each semester. He formalized internal communication and external promotion, and in the midst of pandemic restrictions, grew online meeting attendance from a handful to more than a dozen students. He invited and promoted accomplished authors and speakers, such as biblical archeologist Dr. Craig Evans to address the group, which facilitated growth in chapter membership and participation, now and into the foreseeable future.

More importantly, Sam consistently models the attributes of a Ratio Christi chapter member, a student leader, and a true evangelical Christian who is serious about his faith in Jesus Christ. He stepped out of his comfort zone to address students at assemblies in local Christian schools on behalf of Ratio Christi, warning them of the pitfalls and temptations faced on a hostile secular campus where the culture is adversarial to the Christian worldview.

In a popular video on YouTube, he encourages young people to seek out or participate in starting a Ratio Christi club on their respective campus. It can be viewed here: HCS Chapel 2-10-21.We are blessed to confer the distinguished Legatus Christi honor on this outstanding young Christian apologist and expect him to exceed the high standards of integrity and ethical behavior throughout his life and career.