In our May 2014 Newsletter, we featured Julie Miller who is the Ratio Christi Chapter Director at Rutgers University. She couldn’t stop talking about the student members of her chapter, and this past season was proud to present two of them with Ratio Christi’s Legatus Christi Certificate. The Legatus Christi Certificate program was created to recognize students with outstanding achievements in apologetics training. This month, we’d like you to meet the two from Rutgers, Isaac Woodward and Andrea Morocoima. First, read about Isaac Woodward:

Woodward is mentioned in Miller’s interview as being a student instrumental in forming the Rutgers RC chapter with her several years ago. He ended up being student president of that chapter. Now, Woodward has received his Bachelor’s Degree with High Honors in a combination major of Philosophy and Political Science. Miller explains why Woodward deserved some recognition:

“Most people who know Isaac appreciate his sharp intellect and his ability to make a case for Christianity,” she says. “But the crucial virtue that allows others to gain from Isaac’s intellect is his desire to show respect and civility to all people. He exemplifies the last part of the command in I Peter 3:15, ‘but do this with gentleness and respect, keeping a clear conscience.’  Our Ratio Christi chapter meetings include a wide variety of students from different worldviews and academic disciplines. Our goal is to respond to objections and questions by offering good reasons and evidence for Christian truth claims. Isaac is respectful, he listens and gives fair representations of opposing views and persuasive, creative responses through relevant analogies, philosophy and laws of logic.  He’s made inroads with students in the atheist group on campus and has them viewing Ratio Christi as a cool place to come.  Isaac’s learned it’s not enough to have the ‘reason of Christ;’ one must also have the character of Christ to be an effective ambassador.”

For readers who follow Ratio Christi news and media coverage, the name Isaac Woodward may already be familiar and you’re wondering why. In early May, Isaac represented the conservative student body of Rutgers when he was asked to appear on Fox News’ The Kelly Files with Megyn Kelly. The TV program covered a protest on campus by students who did not want former Secretary of State Condoleezza Rice to speak at commencement exercises because of her connection with President George W. Bush’s administration. We asked Isaac how he was selected to be on the Fox News program.

“I’ve participated in training at the Leadership Institute (trains young conservatives in how to speak out for their point of view). They contacted me to see how they could help publicize and support Ratio Christi. When the Kelly show was looking for a student to represent the conservative side of the Rice issue, she contacted Campus Reform, the News project of the Leadership Institute. I was known to the Institute for writing news for the Intercollegiate Review, including one article comparing Condoleezza Rice to Susan Rice (President Obama’s National Security Advisor). I also attended a debate about the controversy and was the only person to ask a question of the Anti-Rice debaters. So, I guess I was recommended!”

(RC: Isaac is a prolific blogger for the Intercollegiate Review, where he takes on hot topics like “A Tale of Two Rices,” the ultra-liberal culture, the same sex marriage debate, and science intersecting with faith.)

RC: What did receiving the Legatus Christi recognition from you Chapter Director mean to you?

IW: Receiving the Legatus Christi Certificate was a profound experience. It was a visible expression of the recognition that Ratio Christi had of my attempts to give a reason for the hope that is within me. I didn’t win every argument or every heart in my time at Rutgers, but I steadfastly contended for the truth of the Christian worldview. I thank God for Ratio Christi and the people it brought into my life. I hope to never cease my careful study of the faith which has changed the world and my own life.

RC: Tell us about your background – like how you came to Christ and got interested in philosophy.

IW: I’ve been a Christian since age five. I remember my dad was tucking me in one night, and I told him I wanted to accept Jesus into my heart. When I was 14, I found some philosophy material, like Plato’s writings, and fell in love with it, and soon began liking audio books and debates on the topic, and topics related to what Ratio Christi teaches. Then, I found out about Summit Ministries (an educational Christian ministry formed in response to our post-Christian culture), and attended their two week Student Conferences three years in a row, along with my fellow Legatus Christi recipient, Andrea Morocoima. I used that training by going on staff for Summit in Tennessee in 2011 and Colorado in 2012, and had the honor of attending Summit [worldview training] in Oxford, England.

RC: Why did you choose Rutgers University?

IW: During my research, I found the Rutgers philosophy program was ranked the second best in the country after NYU, and NYU was much too expensive.

RC: What’s next for Isaac?

IW: I’ll be doing an internship in Washington, D.C. this summer with the Koch Foundation where I’ll receive special training in partnership with the American Legislative Exchange Council (ALEC). In the fall, I’ll be a John Jay Fellow as I carry on for my master’s degree, and hope to go all the way to a PhD – something to do with Philosophy and Reason.

RC: And, we hear you have a happy piece of good news…

IW: I’m engaged to a wonderful girl I met at Summit. She is my best friend and a fantastic scholar. We share a mutual love of scholarship and the pursuit of truth. I cannot wait to marry her and start our shared journey.

RC wishes Isaac the best of God’s blessings in all his endeavors and his future marriage.

Content in blogs does not necessarily represent Ratio Christi’s views. 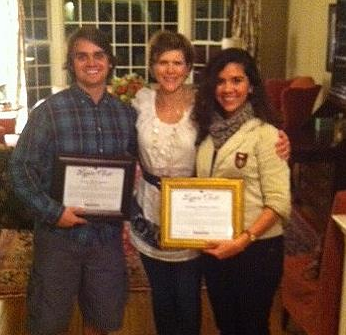