Uniting with an atheist to defend the university

Previous Next
Uniting with an atheist to defend the university

A Christian and an Atheist Unite

Defending Intellectual Diversity at the University 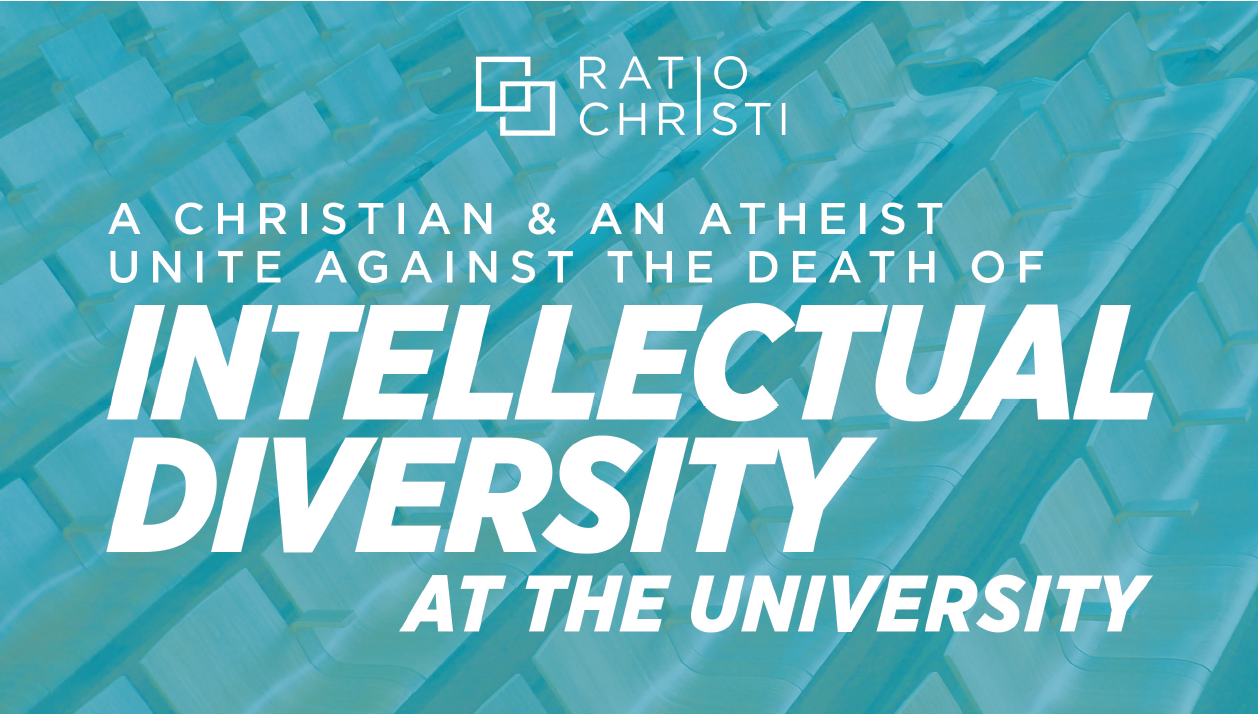 Utah is one of the least Christian but most religious areas in the country. So it may come as a bit of a surprise that a Christian apologist and an atheist professor are coming together for a speaking series at four Utah universities.

Ratio Christi’s Utah region, headed by Regional Director Tom Koehler, has put together a unique series of events in February. At four colleges in Utah, Corey Miller, President and CEO of Ratio Christi, and Peter Boghossian, an atheist professor, will be teaming up to discuss the death of intellectual diversity on college campuses. This is a tremendous opportunity for students, professors, and thoughtful people of all walks of life to discuss the importance of free thought on university campuses.

An Interview with the Organizers

What do you do with Ratio Christi?

Tom: My name is Tom Koehler and I am the regional director for Ratio Christi covering the entire state of Utah.

What universities do you work at?

Tom: Our goal is to get a chapter at every university in Utah. in one year RC has a chapter at Weber State and the University of Utah. We have a part-time staff at Utah state that is about to start a chapter.  We have some interest at Utah Valley University.

Aaron: Utah is predominantly Latter-Day Saint (Mormon) and thus much of the thinking regarding Religions is about your feelings and personal subjective experiences. We are trying to change the way people think about Christianity. We want people to think in the realm of objective truth – meaning right or wrong vs. personal opinion which means that there are no right or wrong answers in these questions.

What is the environment in Utah for Christian thought?

Tom: At present the percentage of people that consider themselves Evangelical Christians in Utah, depending on what census you look at, is about 5%.  No matter what census you look at, Utah comes up as the lowest percentage of any in the United States.  Except for the University of Utah, most students at most universities are very willing to talk about spiritual things.  It reminds me of how the apostle Paul described the spiritual state of the religious people of his day.  They have a zeal for God but not according to knowledge.  They being ignorant of God‘s righteousness try to be right with God based on their own righteousness.  Not knowing that Jesus is the end of the law for those that want to be right with God.

Aaron: Utah is predominantly Latter-Day Saint (Mormon) and thus much of the thinking regarding Religions is about your feelings and personal subjective experiences. We are trying to change the way people think about Christianity. We want people to think in the realm of objective truth – meaning right or wrong vs. personal opinion which means that there are no right or wrong answers in these questions.

Who is Peter Boghossian?

Tom: Peter is a philosophy professor at Portland State University. We have a chapter at that university headed by Derry Tseng. She orchestrated a meeting between Corey Miller, our CEO, and Boghossian during one of Corey’s trips to the area. From what I understand, Boghossian focuses on critical thinking, pedagogy, skepticism, and atheism. He even wrote a book called, A Manual for Creating Atheists, a few years ago. He’s a big proponent of free speech and free thought on universities, though. To criticize the climate of group think on college campuses, he and some others published some fake research papers that academic journal wound up publishing. This didn’t win him too many fans and he is constantly under threats from people who want to silence him. He actually has to have police protection on his own university!

Aaron: Peter Boghossian is a Professor at Portland State. He is the author of “A Manual for Creating Atheists” and his new book “How to Have Impossible Conversations.” Although a liberal atheist, he is being attacked by social justice warriors for his audacity to claim that truth is objective and for the fact that he is challenging this social justice policies on campus. He agrees with Ratio Christi that more speech on campus is the right answer, not less speech.

Want to learn more about how SOCIAL JUSTICE impacts universities?

Is free speech an issue in Utah universities?

Aaron: Free speech is an issue at ALL universities across the country. There are certain ideas that are not looked upon favorably (usually conservative, christian ideas) and those are usually shouted down. Students at the University of Utah brought Ben Shapiro here in 2017. There were protests that almost turned violent because students did not want him to be able to speak on the campus. The hecklers veto is the main form of “discussion” on campuses all across the country.

Tom: Because of the spiritual nature of Utah, free-speech is probably not as much of an issue as it is in the other states. That is why I think this is a very good topic for the state of Utah. It won’t scare everyone away, on the contrary, it may draw many people.  I would much rather put a fire out while it’s small before it turns into a fire that is out of control.  Believing it is a topic that will draw many people in, we will use the subject of free speech to share the gospel.

Is this going to be a debate?

Aaron: This isn’t a debate, it is a discussion. Dr. Miller and Dr. Boghossian disagree on so much but they agree that they must be able to articulate their positions in the marketplace of ideas.

Tom: The first five minutes of this event will be a moderator talking about the overall importance of diversity of thought at the university.  Next we will have Corey speak for 15 minutes on why he believes from a Christian point of view that diversity of thought is so important not only for Christianity but for society as a whole.  The following 15 minutes Peter will speak and do the same from an atheist perspective.   Then we would have about 15 minutes of planned questions by the moderator. The event will conclude with questions from the audience.  This will not be a debate.

Why team up with an atheist?

Tom: Corey, a Christian, and Peter, an Atheist, have much in common on this subject.  They both have been persecuted for airing viewpoints that are hard to refute but yet are out of the boundaries of current thought.  Many universities have the written core value of tolerance yet Corey and Peter have experience the unwritten greater core value of intolerance.

Are universities that broken?

Aaron: Yes! The University is supposed to be a place that ideas are debated and discussed. They are supposed to be a forum to try and figure out the most important questions of life. Instead they are becoming liberal indoctrination centers. The whole college system is set to implode in the next half century.

Tom: Speaking of values, there was a time when values were passed down from one generation to another through families.  In our current university culture, an average blue-collar family pays to have their child educated at a typical university.  If the student wants to get a passing grade, much less get a job at that university, they will have to claim to accept a set of values that are completely different from the family values they were raised with. These university values are not based on facts, many times facts contradict them, but rather on opinionated feelings that one must accept in order to make it through the system. Even if they don’t accept these values they have to pretend  like they do.  It leaves the family wondering, “And why are we paying for this?”

Shouldn’t Christians be concerned about justice for minorities?

Aaron: Of course we should! We should be concerned about injustice anywhere. We should also be able to have discussions to determine if injustice is happening and how best to deal with it. Those discussions are not allowed on campuses. You either agree with the narrative or you are labeled a racist and a bigot. That is unhealthy and certainly unhelpful in trying to solve these issues.

Tom: We should all be  concerned with liberty and justice for all.  As Martin Luther King Jr said, “People should be judged not on the color of their skin but on the content of their character.”  As soon as we give people preference based on their race, religion or anything else we are no longer concerned for justice.  So let us not focus on anything but equality and justice for everyone. If we focus on any particular group of people we will create a victimization mentality which will be the worst thing we can do for any group of people.  It could also pave the way for a culture to look for someone or something outside of themselves to take responsibility for their success.

Who do you think should attend this event?

Tom: Anyone that is concerned about justice for all should be concerned about diversity of thought. How can anyone think you can have one without the other.  Any casual look at world history will show that when one removes diversity of thought it gets replaced with the thought of dominant dictatorships. You don’t even have to look at history you can look at the example of many current situations in our world today.  It’s amazing that dictatorships still so prevalently exist, and it all starts with the guise of unity of thought. It is as simple as one plus one equaling two. If you are concerned about justice, about the future of our nation, and our universities, you should come to this event.

Join us in Utah

Tom Koehler is Ratio Christi’s Regional Director for Utah and Idaho. He was the kid, on his first day of kindergarten, who raised his hand and asked the teacher why; he never took anything for granted. You can imagine what this was like when he took his general ed classes in a secular college for his biblical studies degree. Apologetics was his favorite subject in college and has been studying the subject ever since. Tom loves to equip others to challenge the status quo of secular humanism, naturalism, and materialism in a loving, gentle, and respectful way. He comes to us with a wide range of experience that has prepared him for this ministry. Tom retired from 20 years of active duty service in the USAF, where he spent his last three years in marketing. He has been a church planter and a full time Pastor for 16 years and is now, by God’s grace, ready to help start RC chapters throughout Utah and Idaho. He also started Good Foundations Academy, which now is a very successful charter school. He is excited to go from focusing on caring for the Saints to focusing on defending the faith that God has entrusted once for all time to the saints.